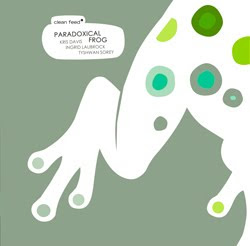 Paradoxical Frog is a trio with Kris Davis on piano, Ingrid Laubrock, tenor, and Tyshawn Sorey on drums. Their self-titled new CD (Clean Feed 183) gives you 75 minutes of their music, and there's nothing to be disdained about any of it. It's serious avant improv. Serious in that it doesn't try to entertain. The three players are after some good expression of their musical minds, and those minds are fertile.

There's chemistry in the combination of these three. Tyshawn Sorey is a drummer of sensitive accompaniment and fire-breathing power when needed. Ingrid Laubrock is a potent weaver of significant form. Kris Davis has a great linear sequencer wired into the musical neural network. The playing generally is out of the Cecil Taylor camp but not in the sense of taking on any of Cecil's lines or phrasing per se.

There is much to get oneself immersed in. And in fact, immerse one must, for this is music that doesn't allow itself to be relegated to the background. It soars. It settles into an evocative quiescence. It dishes out jagged abstractions that anyone who digs the free vocabulary will understand and love, I would assume.

Unassumingly, quietly, Paradoxical Frog makes some stunningly good music that has the essentialism of "new music" but the passion (when needed) of the improv approach. It's revelatory of the three players and their vision, individually and collectively.
Posted by Grego Applegate Edwards at 4:52 AM