Dennis Gonzalez Back with "Cape of Storms" 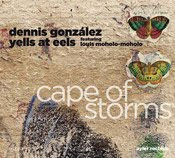 Trumpeter, leader, composer Dennis Gonzalez and his Yells at Eels band quietly, consistently are creating vital new jazz-improv music that has all the best qualities of freedom-in-structure. The new one Cape of Storms (Ayler 117) charts in with some fine music, and it only confirms that Gonzalez is on a roll.

For this one the band is joined by the formidable drummer Louis Moholo-Moholo, who as you would expect adds his personally distinct free-to-complex time groove to the band. Stefan Gonzalez as a result switches to vibes for a number of the cuts and his voice on that instrument bolsters Dennis' compositional lines in interesting ways. He can do some free soloing that sounds good too. He plays second drums for some interesting moments and does some hip percussion as well.

Tim Green plays tenor on a number of cuts and may not be as out front as some of his predecessors in the band but certainly shows he is in the spirit of the music. Aaron Gonzalez is his usual effervescent self on contrabass.

What always seems to strike me about Dennis Gonzalez's music is that he has a real sense of what grooves, lines and concepts will work with the forces at hand and he goes forward with the program in ways that leave you remembering the music vividly after hearing it a few times. And his trumpet playing is a model of style and freedom in the right combination.

So what to say? This is another excellent outing. Grab it up!
Posted by Grego Applegate Edwards at 5:03 AM