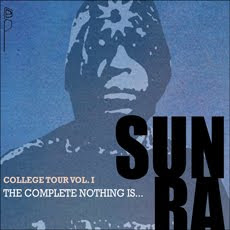 Sun Ra's Nothing Is, recorded live on a tour of NY State Colleges in 1965, was surely one of his best early releases. The band live, which we were to learn increasingly, was the band at its best. And here they were with all the elements in place. The original LP had 40 minutes give-or-take of the concert material and it was an instant classic, though the world at large took some time before it came to embrace the music and join the already convinced.

Now we have a release of the complete date, more than two-hours worth of Ra and the band in excellent form. College Tour Volume One: The Complete Nothing Is. . . (ESP 4060) is one of those revelatory issues that comes along infrequently. The band stretches out and soars. There are many nice surprises: a longish version of "The Satellites are Spinning," a bop-to-swing "Velvet," a long version of "Second Stop is Jupiter," and more. Too much to note here.

What's especially nice is the chance to get Sun Ra's acoustic piano work in some depth. It's worth listening to in isolation, because it gives you in a rather early stage the combination of styles he and the band were synthesizing so effectively. And the band sounds great. Clifford Jarvis and Ronnie Boykins get several chances to act as a hard-bop rhythm section and they do it with fire. There are plenty of all-out horn assaults that the band was so good at putting across, and of course there are some more of the chants, some in very different versions.

It's a great document for showing how the Sun Ra organization at that very moment were incredibly innovative (and of course remained so). When you think of out big bands, you realize they were pretty much IT back then. You can hear on this complete concert how Sun Ra was carving out his group sound with deliberation and total originality. You can hear it all on this set. He had gotten it together totally by 1965.

It's an event no avant aficionado should miss. Sun Ra devotees will especially be happy. I was. I am.
Posted by Grego Applegate Edwards at 5:10 AM