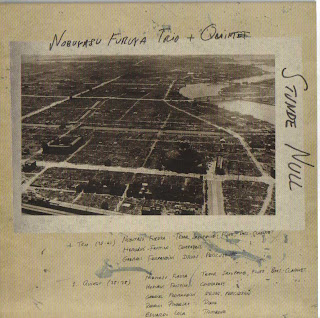 Nobuyasu Furuya, Japanese power house! Nobuyasu plays a BIG tenor, a snaky bass clarinet and a richly expressive flute. At least he does on his CD Stunde Null (Chitei, no catalog # listed). Half the disk consists of Furuya with a bass and drums configuration; the other half adds piano and trombone (the latter from Eduardo Lola, who sounds good).

This is music in the classically out free jazz tradition. Furuya channels Ayler, Shepp, Brotzmann, Gato and the other extroverted tenors of the new thing for his own high intensity expeditions. He has that big, gritty sound that projects right into your cerebral cortex. It's a nicely free and focused out set of performances. The trio sounds just right and the larger group gets that much more torque on their musical driveshafts.

I'm not sure if Mr. Furuya has ever been stateside, but I have no doubt he would be well received at a place like the Stone.

This is wildly raucous freedom. It burns and I highly recommend those inclined give it a listen. Bravo, Nobuyasu Furuya!
Posted by Grego Applegate Edwards at 4:22 AM