Evan Chambers, and His Moving Work "The Old Burying Ground" 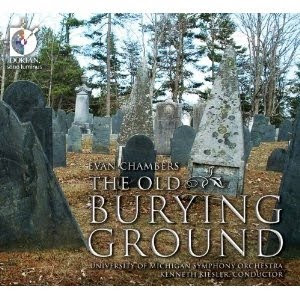 Evan Chambers. Never heard his music before. The Old Burying Ground (Dorian 92113) is a major work that, once heard, makes you attach much to the name Chambers.

It's a long, ambitious piece for full orchestra, one folksinger, soprano, tenor, and a moment here and there for recitation. The work is based on the composer's experience of visiting a very old graveyard in Jaffrey, New Hampshire. It's one of those places from colonial times, the church it was a part of now gone, the graves and exotically archaic gravestones of unknown and now unknowable people all that's left to mark a world that has disappeared into time. From that experience Maestro Chambers has fashioned a kind of elegaic meditation on the lives and deaths of those who lived, died, and ended there, to be forgotten by those who came after. I'd say it reminds me of Hindemith's elegaic tribute to Lincoln/FDR based on Walt Whitman, When Lilacs Last in Dooryard Bloomed. But no, not precisely.

Still, the music is movingly impactful and very memorable in the way Hindemith's work is, so that's where there are parallels. And like Lilacs and, for that matter, Barber's Knoxville, it most poetically conjures time lost. What is especially eerie about the work is that much of the music evokes the sort of folk strains that early settlers in that part of New Hampshire must have lived with. The music is quite beautiful for that and intrinsically as well. Chambers is a lyrical composer, a great musical storyteller and a composer of dramatic reflection.

This most certainly in my mind is a important work of and for today, but with an archaic quality that sets it apart.

The poetic texts, the excellent vocalists, and the University of Michigan Orchestra under the direction of Kenneth Kiesler make for a definitive performance. I only hope other orchestras take this work up. I believe it would have great appeal to audiences.

Highly recommended.
Posted by Grego Applegate Edwards at 4:46 AM