Rosario Giuliani: Tristano School or No? 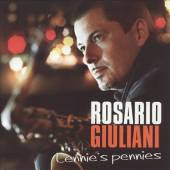 Is there a Lennie Tristano school of music making out there today? If so, who belongs? Sol Mosca, Warne Marsh and a number of others that might well qualify are no longer on this earth. Lee Konitz keeps playing beautiful music but perhaps he is so much in his own right that he is a school of his own. The same applies to Connie Crothers. She is a tabula rasa artist of exceptional creativity and ability.

Is the question a little ham-headed? A parallel might indicate that it is. Jackie McLean was thought to be a Parker protege in his first years. But in time he became so much his own stylistic influence that the remaining thread back to Bird seemed unimportant. Similarly, there is some relation between Bird and Ornette, but to place Ornette in a Charlie Parker school is clearly playing fast and cheap with categories.

So. Listening to alto saxophonist Rosario Giuliani's Lennie's Pennies (Dreyfus 46050 369522) the first thought is, "Hmm...Lennie School?" Of course there's the title cut. Giuliani's tone is rather Konitz-like in its bittersweet singing quality. And his interaction with pianist Pierre de Bethmann is a little contrapuntal in ways that suggest some of Lennie's preferences. The ever stimulating Joe LaBarbara plays more drums than some of Lennie's sidemen. (And Darryl Hall plays some fine bass too.) They do a few standards that Lennie would have liked. But in the end, this is a contemporary straight-ahead date with finesse and fire and the Tristano comparison doesn't really explain or illuminate much.

The fact is, this is a nifty band playing thoroughly in-the-pocket. Giuliani and de Bethman solo strongly. It's just very good music. And to hell with the idea that these guys belong to some school. It's music that will satisfy you quite nicely if you want a contemporary wrinkle on brainy harmonically based improvisation. That's simple, but it involves some real pleasurable listening.
Posted by Grego Applegate Edwards at 4:44 AM