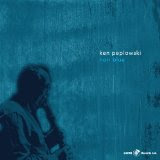 Ken Peplowski? Well. . . he's playing better than ever. Take him on a day when he is psyched to lay down some terrific solos. Add Shelley Berg (piano), Jay Leonhart (bass) and Joe La Barbara (drums) and set them loose. What you get is Noir Blue (Capri 74098-2).

Everybody seems to be bringing it on this one. Peplowski most so. His DeFranco-Goodman clarinet limpid or hot, alternatingly. His tenor with just a hint of terminal vibrato and sometimes a hoarse throat in the older manner. . . . and yeah, it can swing like the Dickens.

The band runs down some songbook and jazz standards without sounding like it is sick of any of them. And some of those song forms are not that often played either, like the Ellington-Strayhorn "Bourbon Street Jingling Jollies" (from the sometimes overlooked masterpiece New Orleans Suite). That one sounds just great! And there are a couple of originals by Berg and La Barbara, respectively, and they do not detract from the proceedings. The general level is high here from the first to the last notes of the recording.

And speaking of last, the very last number is Peplowki's "Little Dogs," his tribute to Ornette Coleman. It has a kind of outside-ish head and then Ken plays some quite interesting outbop on tenor. Hey, do an entire album like this. Why not? It's quite interesting.

The whole set makes me wonder where I've been. I am guilty of taking Mr. Peplowski for granted. This one shows that we should most definitely pay attention. It's a very good outing and quite refreshing. Recommended.
Posted by Grego Applegate Edwards at 4:57 AM