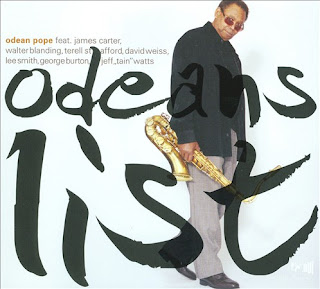 Odean Pope has been on the scene ever since he became an important member of Max Roach's group years ago. But he sometimes gets overlooked in the scramble to assemble a national shrine to the best players active. Yet he belongs there.

This is quite amply demonstrated on his recent album Odean's List (In + Out 77102-2). The album features Odean in an octet setting, with three saxes, two trumpets and piano-rhythm. Jeff "Tain" Watts sounds excellent on the drums and James Carter doubles on tenor and bari to add to the lively sound of this group. But everybody seems to be in the mode. It's a richly voiced series of straight-ahead originals (and a standard or two) at play here, and the arrangements compliment the soloing for a full aural kick in the teeth.

The material has much of the late-'60s-early seventies post-Trane ambiance to it, which means there's exuberant fire and hard swinging. Odean and his principal soloists sound terrific and the full-out density of the group in happy cohesion leads to a very satisfying experience.

This is one of Mr. Pope's very best albums. It makes me smile to hear it.
Posted by Grego Applegate Edwards at 4:36 AM