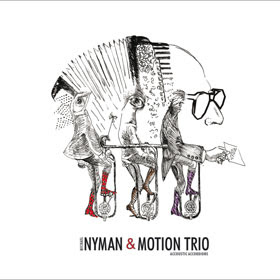 If you read my review of two of Michael Nyman's later operas (see December 15th posting from last year), you'll perhaps recall that I discussed what seemed to be new, deliberately banal elements injected into his music. In the operatic context, the music fit the dramatic action: music hall sorts of things, 1940's popular dance music allusions. . . . All that fit in with the period and plot.

Turning today to some of Nyman's chamber music, viz his recording with the Motion accordion trio from Poland (MNR 117) some of that banality again reappears. To be honest it put me off at first. There are what sound like polka-march references, doo wop rhythm section accompaniments and other "found" referential elements.

To backtrack, what we have on this disk is ten relatively short pieces, all but one including the Motion Trio, many with Nigel Barr added on trombone or euphonium, and Michael Nyman on the piano (with himself alone on one piece).

The music has been arranged by Motion Trio member Janusz Wojtarowicz.

Much of the music has a rock-steady sort of insistence rhythmically, which the accordions accentuate. But there's always an irregular, sometimes quirky element in the music that steers it away from the sort of bludgeoning hammer stroke sound that some heavy metal favors, for example.

After several listens, I came to like this music. It's not minimalism that others have done. It's Nyman's own brand. Now as long as one realizes that Nyman's more overtly insistent sorts of compositions do not negate or take anything away from his other work or, indeed, the other various approaches to minimalism that have flourished in the past 40 years now, then one should be free to enjoy the music on its own terms.

The Motion Trio are an impressive lot. If you love the accordion, this will give you plenty to love. It's so quirky to hear accordions doing this kind of music that I found myself pleased with it after a time. It sure beats Lawrence Welk!
Posted by Grego Applegate Edwards at 4:45 AM