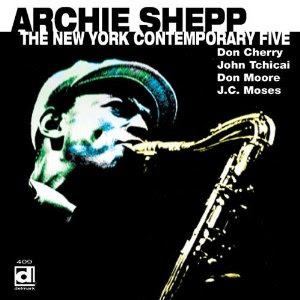 There has been so much ink spilled over the music of Don Cherry and Archie Shepp, especially back in earlier days, that I feel preceded. This has never stopped me in the past though, and not now either.

The album by Archie Shepp and The New York Contemporary Five (Delmark 409) first came out in the states in 1967 I believe. I didn't get to it myself until around 1971. It's a live date from the Jazzhus Montmartre, 1963. Shepp, Cherry and John Tchicai were the equally featured front liners, with bassist Don Moore and drummer J.C. Moses rounding out the group.

It's available on CD now, and one can only feel glad of it. The New York Contemporary Five were one of the first important groups to step into the floodlights after the advent of Ornette Coleman's seminal quartet recordings and appearances. By the time this album was recorded, the classic OC Quartet was no more (at least for a time) and so Don Cherry was free to pursue new horizons. He found them with Tchicai and Shepp. The set recorded that night featured two pieces by the founder of the feast, as it were, Ornette, plus a Monk classic and one original apiece by the three front liners.

It is a band that goes both beyond and behind what OC had been doing. The band is putting across a sort of early freebop associated with the principals through the OC influence, but also extending it as well as rooting it in new soil. The horns put together head arrangements plus some horn lines to accentuate the soloist of the moment. That works fine and is completely idiomatic to where they were back then. And that was a very good place indeed. Shepp was forming his style and was well on the way to getting it perfected. Sometimes he sounds a little more under the influence of Trane than he would later be, but he sounds quite enlivened. Cherry is himself, as always, puckish, foundational yet given to flights outside the range and sound of what the mainstreamers were doing. Tchicai is the more unsung of the three historically and he shows why he should be recognized. His sweet-and-sour plaintive alto is in very good evidence.

A note about J.C. Moses. He plays a fair amount of drums on this set. Does he overplay? Subtract his many accents and bombs and it would not have been the same group. So no, he does not.

This and their Savoy recordings are prime examples of the new. new thing. They sound as good or even better to me than they did when I first heard this album. It is timeless. It is indispensable listening for the serious follower of the avant garde lineages of free jazz. But more importantly, it is perfectly raw, but perfectly great music.
Posted by Grego Applegate Edwards at 4:38 AM