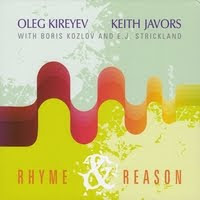 Oleg Kireyev is a Russian-born tenor exponent. He teams with pianist Keith Javors in a new CD, the first by the co-leaders, Rhyme and Reason (Inarhyme 1003). They are rounded out by some nice bass from Boris Kozlov and the drumming of the increasingly present E. J. Strickland.

This is a vehicle for plenty of blowing and the blowing is good. Kireyev has a fairly big sound. I hear some Benny Golson in there. The promo sheet mentions Joe Henderson. I would not disagree. Javors plays a together contemporary piano style. He has a nice way of picking out a melody contour and hitting on some worthy voicings. The program is of an all-originals sort. It is not uninteresting.

They play rather inside much of the time, but with strength and some smouldering heat. They can take it out a little, like on the beginning of "Springtime," where, yes, there's a Henderson influence that's somewhat pronounced.

Now I suppose I should note, especially in contradistinction to some critics, that talking about influences is not a copout for the jazz writer. Like in classical Indian music with its garanas, jazz has evolved to a point where there are fairly well-established schools of playing. Again, as with Indian music, players can come up as loosely confederated with a style, then as they go on they may innovate, build themselves a ladder into their own personal style. It's important to recognize that this is happening in jazz, that it is not illegitimate and that everybody cannot be expected to start out as wholly original, though that's a good thing when it happens. So if I recognize a bit of Henderson and Golson in Kireyev, I am just pointing out where he comes from in style. I would be dishonest if I pretended that all players coming up are uniquely endowed with a super-individual musical way of being. And if I hear influences, I must report so. It gives you, the reader, an idea of what to expect. If someone doesn't have the ears to follow the lineage of the music as it is evolving today, I hope they would understand that it is nonetheless there, and refrain from seeing aural acuity as a threat. That doesn't mean everybody will always agree on where a player is coming from. But it's a good thing to proceed with some sort of analytical frame.

Long digression. Back to the point. This is quite attractive contemporary jazz. Are these players the next big thing? I don't imagine. You can either wait for that big thing to come, or just appreciate what is here on the scene. Or both. I like both. And I like Rhyme and Reason.
Posted by Grego Applegate Edwards at 5:02 AM