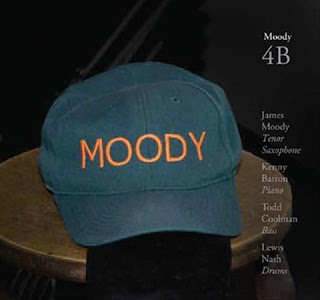 Anyone who is 85 years old has earned the right to sit back and revel in the highlights of a life well-spent. In the case of tenor titan James Moody, the many years of his musical excellence gives us all an enriched musical world. He could stop. But he still can play it! So Mr. Moody keeps on blowing.

His latest, 4B (IPO 1017), shows that he still has it. OK, so sometimes his phrasing can be less that perfect these days, but the Moody approach is there, pared down to fighting weight. His cohorts for the venture follow up on the album of last year. Todd Coolman walks the bass with authority, drummer Lewis Nash swings along gracefully, and Kenny Barron never sounds anything less than magnificent.

There are a couple of originals, one by Barron, one by Coolman. The rest are a mix of songbook and jazz chestnuts, done Moody style.

It's great to hear Mr. Moody hold forth with the sound and sequential improvising that made his name for so many years. We can only be grateful for his contributions, which continue so exhuberently on 4B.
Posted by Grego Applegate Edwards at 4:31 AM

Labels: bop and after, james moody, review of "4b"