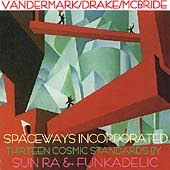 Concept albums spice up musical life a bit. Most of the time. That's true of Spaceways Incorporated's Thirteen Cosmic Standards by Sun Ra and Funkadelic (Atavistic 120). Spaceways was/is Ken Vandermark on reeds, Nate McBride on acoustic and electric basses, and Hamid Drake on drums. The session was recorded in 2000. It's a bit of a hoot. These are some of Chicagoland's finest, of course, and they seem to have been stimulated by the contrast between the two musics. You get out funk for the Funkadelic tunes, and you get interesting trio blowing and arrnagements of the Sun Ra pieces.

Hamid gives the funk rhythms his skillful twist and of course he can play in any manner of outness or swing powerfully. And he does. Nate is solidly there on the electric funk lines or the finessed Ra on the upright. Ken V. goes to various places as only he can do. It's a fun record!
Posted by Grego Applegate Edwards at 4:16 AM