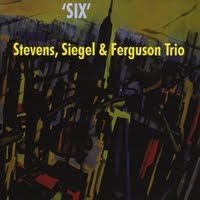 "Like the Evans, Jamal and Jarrett trios." That's what I accidentally read as I was searching for the cover art to Stevens, Siegel & Ferguson's new recording Six (Konnex 5243). Well. sure. And the fact that they are "like" those groups, that is, that they have intricate interplay between all three members, that the bass and drums have equal footing in the musical dialog, that harmonic sophistication and lyrical line weaving are the orders of the day, that they play a good number of standards. . . all that is true.

But they also have carved their own notch onto that particular branch of the music. Six shows that with ten well-considered numbers. The originals, half of the numbers contained in the set, are quite nice and the choice of standards are nothing to sneeze at. "It Never Entered My Mind" is such a hauntingly evocative song and they add some harmonic tension to emphasize the mood of quiet despair. That's true of their treatment of all the non-originals. They are no mere run-throughs.

All three players have a kind of intrinsic power of conviction (to allude to an album title by another trio that they are "like") and a thorough stylistic maturity that make for strong musical results. And of course that implies that they are well attuned to one another's doings on the bandstand (or the studio).

Strength. This trio has it. Six has beautiful music going on. Lots of it!
Posted by Grego Applegate Edwards at 4:54 AM