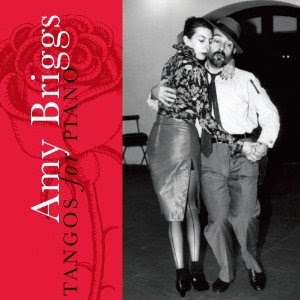 The tango is of course first and foremost a dance that's accompanied by music with a recognizable loping sort of rhythm. At this point a large body of music has developed around the dance, some sickeningly familiar (think of Montovani), others marvelously crafted gems created where the tango is still a thriving cultural complex (Argentina especially) and still others written by composers who wish to work within the form to forward modern classical expression.

Pianist Amy Briggs shows us on her vital solo piano album Tangos for Piano (Ravello 7808) that, something like the morphing of the minuet movement in the classical symphony to a scherzo, present-day composers have extended the definition of tango to, at its further end, a state-of-mind, a suggestion of the loping rhythmic form in a universe of modernity.

Ms. Briggs performs 22 tango miniatures on the album by a great variety of composers. Some of the works are well-known, such as the one by Stravinsky (which is given a ravishingly poignant expression on the disk), and some are so new the ink has barely dried on the music paper.

The result is a very engagingly superb performance of music that enchants and provokes at the same time.

Amy Briggs has such a clear sense of the phrasings, rhythmic complexities and harmonic-melodic logic of each piece that one is led through the modernistic thicket in ways that affirm that complexity and accessibility can indeed go hand-in-hand.

I am so impressed by Ms. Briggs playing that I am tempted to jump ahead and say that this may well be the solo piano album of the year for me. It's lovely and astounding work. She has the drive and immediacy that the best of the jazz pianists have shown and she brings the music very much alive. Bravo! Grab this one without hesitation.
Posted by Grego Applegate Edwards at 4:25 AM