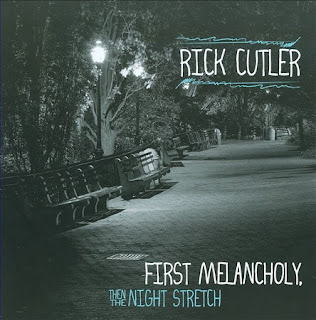 From the evidence of his second CD First Melancholy, Then the Night Stretch (New Dude Records 102) Rick Cutler is a pianist with a lyrical thrust, a soloist that draws upon and extends the work of Keith Jarrett and Chick Corea in that vein, with graceful ostinatos accompanying movingly expressive right hand melodizing, use of space and a quasi-classical solo style that is punctuated with exotic harmonies and reflective reveries.

Rick Culter has an interesting bio. He's not only a pianist but also a drummer and percussionist, for the latter he was on the original recording of Bernstein's Mass He's also been a pit man for a number of Broadway shows, wrote the music for such things as the Dateline NBC opening and closing segments, done many studio gigs, studied with Chick Corea.

For First Melancholy, though, it's it's a matter of solo piano in the ECM style.

He is different enough that what is happening does not smack of plagiarism. It's Rick Cutler music. I'll be glad to file it over with Jarrett and Corea and Steve Kuhn, and will no doubt play it often.

It's very nice to hear and a credit to Mr. Cutler's talent. Give it a spin!
Posted by Grego Applegate Edwards at 4:25 AM