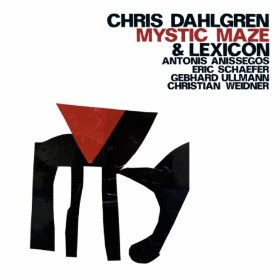 Bassist-jazz composer Chris Dahlgren has done something different. His new album Mystic Maze (jazzwerkstatt 088) brings together a crack small-ensemble gathering of jazzmen to perform his ultramodern music. And overlaying that is a recitation of some critic's poisonous anti-modern bashing of the music of Bartok.

At first I was annoyed by the recitation. It distracted from what was going on musically, I thought. I still do think that, but on the other hand the critical text is so venomous and off-the-wall that I now think it rather funny.

What's good about this album though is the music, which has a sort of third-stream abstractness about it, a sort of long-phrased quasi-twelve-tone feel that relates in part to the later music of Anthony Braxton without having recourse to Braxtonian phraseology per se. The lines go on--and over, under and in-between there is improvisation and, usually, pulse.

It's a bracing set of pieces, like a dive into an ice-cold stream after hours in an Indian sweat-house.

The participants--Dahlgren, Antonis Anissegos, Eric Schaefer, Gebhart Ullmann and Christian Weidner--all do a great job interpreting the music, adding the looseness and flourish of avant jazz.

In the end, the recitation is integrated well into the pieces. And the music is very, very interesting.
Posted by Grego Applegate Edwards at 5:01 AM