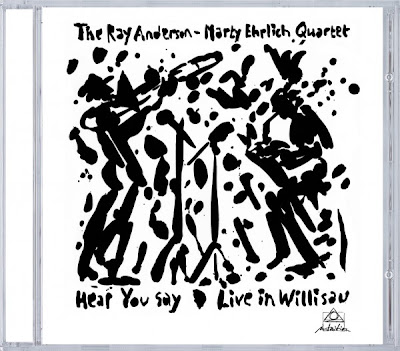 What a great idea for trombonist Ray Anderson and reedman Marty Ehrlich to form a working quartet! The results have paid off musically, as can be heard in profusion on their Hear You Say - Live in Willisau disk (Intuition 71303). They've played together in various contexts over the years, but this is the first of what I hope are many co-leader efforts.

Joining them is a rhythm team that drives the frontliners to some high places. Brad Jones is spiky and ever-pushing on the bass; Matt Wilson brings a very swinging percussive finesse to the sound, and that is one of the reasons why he's at the very top of the first-call list for drummers in and around NYC.

Together the four create an uninhibited, over-the-top exuberance that combines the incendiary aspects of traditional New Orleans frontliners and the sailing qualities of Ornette Coleman's classic small groups. In the process though they remain totally themselves, which is saying a great deal, as Anderson and Ehrlich have been playing their own tune for many years.

Like all great chemical composites in the improvisational arsenal, the joining of the four creates something over and above what each of them might do individually. This is a set that soars! It's something I would have no second thoughts about playing for someone who wanted to know what "modern jazz" sounds like today. Enough said. Just listen and you'll see.
Posted by Grego Applegate Edwards at 4:33 AM