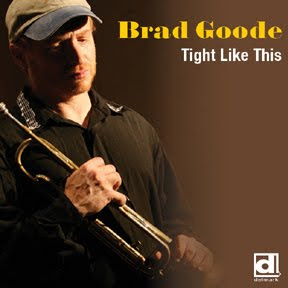 Brad Goode has been around. Ernie Krivda, Von Freeman, Jack DeJohnette and his own bands for some time, not to mention many other associations. He is a trumpet player with roots. His first strong influence was Satchmo and he studied with Cat Anderson.

His new Tight Like This (Delmark 594) has much going for it. There are strong roots here, but they've been taken somewhere new. There are some older numbers, Cugat's "Nightingale," an Irving Berlin tune, a classically hip "Softly As In A Morning Sunrise." And there are also a goodly number of Goode originals, which hang together nicely.

He and his fine quartet take that music somewhere different. It's rooted, as I said, but it's transformed to fit in their own contemporary world. Adrean Farrugia is new to me. He plays a very hip piano, very lucid and not coming out of an obvious influence. He swings and makes real musical sense with his improvisations. Kenny Sill is a hot bassist, capable of walking the dog to death or taking a nice solo. Anthony Lee kills me on drums. He can crack the sky or quietly sizzle along. And Brad's trumpet is not easily classifiable. So let's not try. He's a terror with or without the mute. He runs cool and hot, in the best sense. He's remarkably poised.

Well, I suppose you can tell I liked this album quite a bit. Check it out, check it out.
Posted by Grego Applegate Edwards at 4:25 AM