Steve Reich, Our Reigning Minimalist King, and His Latest 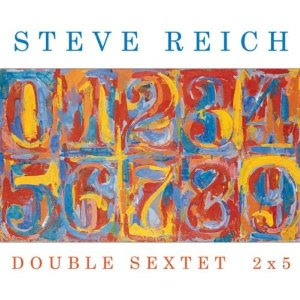 Steve Reich's compositions have shown development, a kind of period-to-period movement. There were the initial electronic and instrumental process studies (like for instance "Come Out"), the first extended ensemble works ("Four Organs"), an increasing African/Indonesian element ("Drumming"), the injection of a sophisticated melodic inventiveness ("Music for 18 Musicians"), the heightened focus on vocal elements ("Tehillim"), the development of an orchestral palette and introduction of slow movements ("The Desert Music"), the attention to speech elements and how they inflect into musical phrasing ("Different Trains") and on from there. With Reich's 2010 release Double Sextet / 2 X 5 (Nonesuch 524853-2) we find him doubling back, in a sense, to the chamber style of his third and fourth periods. Now that's fine with me. He crafted some minimalist masterpieces then, like the "Octet/Eight Lines," and any chance we get to hear him construct pieces out of his own paradigmatic melodic-rhythmic singularity is worthwhile indeed.

There are two pieces on this disk, as the title suggests. "Double Sextet" was written for the eighth blackbird ensemble. They record the two sextet parts via overdubbing. It's a wonderful piece in a classic Reichian vein. The fact that it won the Pulitzer Prize in 2009 is an indication of the recognition he now gets, and deservedly so.

"2 x 5" was written for a five-piece electric Bang On A Can ensemble, including two electric guitars, electric bass, piano, and drums. What they play is not rock in any sense, but Reichian line-raveling for what otherwise could be a rock band.

Both pieces mesmerize without a catatonia-inducing stasis or an overarching banality (two faults I occasionally detect in some minimalists). This is prime Reich, with all the subtlety and wonderful ways. He stands at the forefront of those who have forged this modern style and I believe he is the very best of them all. This album gives you some intriguing and very pleasurable evidence!
Posted by Grego Applegate Edwards at 4:43 AM