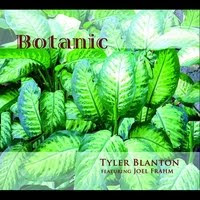 I've been covering some of the new vibists on these pages in the recent past. Today, another. Tyler Blanton makes his debut with the recent Botanic (Ottimo). This is a player who executes cleanly the bebop lines so authoritatively established by Milt Jackson, as well the harmonic richness and slight country-jazz feel of the early, multiple-malleted Gary Burton. In the process Blanton doesn't quite sound like either. He is less legato that Milt could be and he drives in ways that Gary usually doesn't.

For the album he has assembled a cast of players familiar with his music and style. Joel Frahm plays a prominent role as a contemporary sounding tenorist and soprano man; the bass and drum chairs alternate between Aidan Carroll and Dan Loomis, and Richie Barshay or Jared Schonig, respectively.

The album concentrates on Blanton's writing as well. He shows himself a very competent and energized writer of ensemble vehicles ranging from boppish items to modern-sounding changes-based vehicles to jazz-rock anthems.

Though this the artist's debut Blanton shows remarkable poise and directedness. He makes all he attempts; he shades his phrases with subtlety. And Joel Frahm puts in some very nice performances too. Oh and they all swing nicely.

Recommended for those who dig the vibes!
Posted by Grego Applegate Edwards at 4:17 AM