Ernie Krivda Stokes the Flames with "Blues for Pekar" 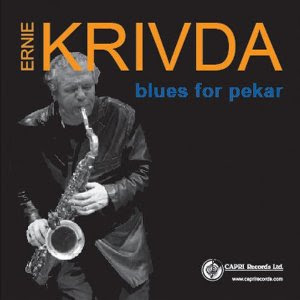 Tenorist Ernie Krivda has unassumingly been at it for decades, building up a rather voluminous discography of hard swinging jazz with roots in the hard bop of the mid-late '50s through early sixties. Many of those disks are quite fine; many were made for the Cadence-CIMP label complex Bob Rusch heads.

And herewith, a new offering [Blues for Pekar (Capri 74110-2)] (dedicated to jazz writer/critic Harvey Pekar) for his quartet-quintet (tenor, piano, bass, drums and an added trumpet/fluegel on four of the seven numbers). It's a solid band of Detroit-associated veterans. Sean Jones or Dominic Farinacci bring additional excitement to the mix and very good interplay with Krivda on the pieces where they are present.

Mr. Krivda embodies a jazz tradition without enslaving himself by copying one or more of the past master-playing styles. Like Scott Hamilton does for late swing/early bop, Krivda does for middle-hard bop. He plays himself and he plays with great authority and swinging imagination, set solidly square into the style he quite obvious favors.

This is a good one if you want to hear what he is up to. He runs down some effective blowing vehicles and a few classics-standards in a very engaging set. A favorite of mine is his balladic treatment of "More Than You'll Know," which packs a wealth of musical ideas into the hard-yet-wide, penetrating sound that is a Krivda trademark. But there is much else to enjoy as well. Recommended.
Posted by Grego Applegate Edwards at 5:17 AM