The Bebop Trio Takes A Tradition and Makes it Personal 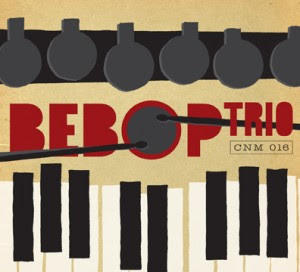 You hear a name like the Bebop Trio and you think, "Oh, OK, I think I know what this one is going to sound like." In the case at hand, you'd probably be wrong. The trio's self-titled debut (Creative Nation Music 018) is not at all the business-as-usual rehashed bebop bag. It has an unusual instrumentation: Lefteris Kordis on piano, Alec Spiegelman, clarinet, and Thor Thorvaldsson on the drums. They alternate spontaneous improvisations with unusual treatment of some terrific and mostly neglected classics: Powell's "Celia," Shearing's "Conception," Hope's "Boa," Ellington's "Zurzday," Nichols's "Change of Season," and Tristano's "317 East 32nd."

Comparisons are inevitable with clarinetist Don Byron's Ivey Divey, an album that featured Byron, Jason Moran and Jack DeJohnette in a program of Lester Young associated music. There IS some relation between the two. But the Bebop Trio hold their own because they are saying something of their own.

What is so interesting about this group is how they combine freely articulated improvisations with bop styles and even swing. They do it very creatively. Some of the early-mid Giuffre trios come to mind, for the obvious presence of Spiegelman's limpid clarinet, the open spacious sort of approach, and also Kordis's sometimes apparent similarity to Paul Bley in his freely rubato reworking of bop. But again, there is enough different that you only recognize the lineage.

Thorvaldsson's drumming is open, creative and both rhythmically and coloristically distinct. He plays an important role in getting an uninhibited rhythmic asymmetry into the mix. Then there's the interplay between the three, which is fabulous. Both Kordis and Spiegelman have something definite to say on their instruments and they benefit greatly from the open-ended format.

The treatment of the classic bop pieces works seamlessly into the free improvisations that frame them.

This is exceptional music, a true breath of new life. These are players that need to be heard. You can help that along by listening. I think you'll be very glad you did.
Posted by Grego Applegate Edwards at 5:28 AM