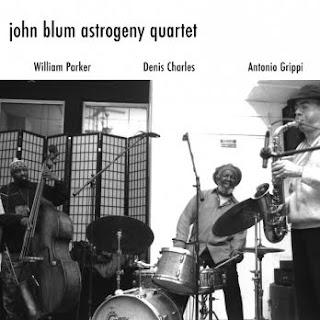 John Blum played piano on several cuts of Sunny Murray's excellent Perles Noires Eremite two-CD set. Beyond that his Astrogeny Quartet (Eremite 049) is my first exposure to his playing in depth.

The album has a classic free-new thing ring to it, thanks to all involved. William Parker centers the music with his usual very strong and personal approach. Denis Charles. a drummer who has not been given the recognition he deserves, fleshes out the freetime barrage with shifts in emphasis and a sonic control over his set that marks him one of the very best free drummers of his generation. (Not to mention, of course, the beautifully brittle staccato swinging he lent to early sessions by Cecil Taylor and the Steve Lacy-Roswell Rudd first edition group.)

Antonio Grippi positions well in the group as altoist (and alto clarinetist) in the firey tradition of others before him. He brings a vital life force to the ensemble's energy level. And as a clarinetist he stands out as someone with a bit of post-Redman originality. And then there's John Blum. He works out of the Cecil Taylor tradition to formulate his own dynamically turbulent piano. It's inventive and consistently stratus-seeking. The head compositions are a product of Grippi and Blum and certainly set things up well.

This was the band's only recording and comes out of the single gig they had (in 1998) before going their separate ways, seemingly temporarily. Unfortunately this was to be Denis Charles last New York recording, and he died unexpectedly not long after. So in a way this is a Denis Charles memorial as well as a rare look at an extremely short-lived line-up.

Ultimately it has some excellent spontaneously free playing in the best tradition. William Parker and Denis Charles form and extraordinarily driving rhythm team and the Grippi-Blum front line head out to a high place and stay there for the duration.

This is a recording that wears well on the ears. In fact the more you listen, the better it comes together in your head. The level of intensity is not perhaps for everybody, but those who respond to a whirlwind energy session will most definitely dig what happened on that gig.

And so long Denis. We miss you.

Posted by Grego Applegate Edwards at 4:46 AM