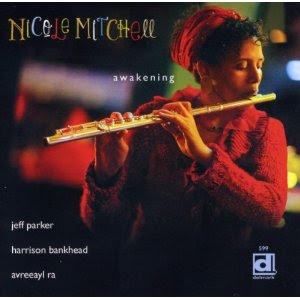 In case we need proof, Nicole Mitchell's Awakening (Delmark 599) shows us that Ms. Mitchell has become one of the premier flute players today. It's a swinging quartet date with well-chosen players, some of Chicago's very best. And it's about as close to straight-ahead as you are likely to hear from Nicole. Now don't make the mistake of thinking that straight-ahead is necessarily synonymous with playing it safe, with endless repetitions of licks and cliches from earlier musical styles. That may be the unfortunate case for some players, but not these folks. NO! Ms. Mitchell does NOT play it safe. And her playing is Nicole right now, not somebody else rehashed.

The compositional elements remain a key part of Ms. Mitchell's way but this time they are primarily springboards to extended band improvisations. Along the way Nicole shows big bright tone, great agility, strong creative control over tone color and an imaginative choice of lines that put her straight-up on top. Jeff Parker on guitar never sounded better. If he sometimes brings to mind Ted Dunbar on this date, it is only in the sense of the restless searching, probing quality of his lines. Harrison Bankhead, as anyone who has listened knows, is one big powerful mother of a bass player and he puts it all out there for us to hear. Drummer Avreeayl Ra is a name less familiar to me. But he gets in the pocket of whatever they are doing: swing, rock-funk, freetime, and STAYS there.

This isn't tame music. It is not music that holds back. It is not music that treads lightly for fear of bending a branch or snapping a twig. It goes where it will with no fear, with great spirit, heartful soul, and a wildly exciting ride to get us all there. This is one f=terrific group and Nicole is life affirming and breathtaking at the same time. Dig this one deeply and you'll get to another place.

Posted by Grego Applegate Edwards at 5:25 AM