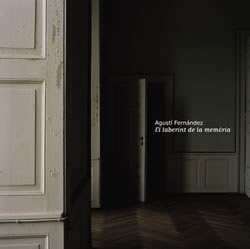 Pianist Agusti Fernandez was commissioned by Mbari Records to do a series of piano improvisations based on Spanish classical piano pieces. Over a period of two years he played around with motifs from those pieces, gradually fleshing out his impressions of the music until he was satisfied with the results. El laberint de la memoria (Mbari 04) is the resultant release, a widely exploratory plunge into the well of Spanish tonality and pianism.

Agusti does not often quote long passages from the source works. He rather lets the music inspire him to construct a set of free improvisations that present largo-esque balladry of deep ponderousness, notey, restless expeditions into freeform expression, quiet reminiscences on the musical forms evoked, droning minor-keyed flamboyance, dampened noted atmospherics, Cecilian cluster-bursts of piano utterance, and ringing cascades of sound blocks.

It conveys the imaginative depth of feeling Maestro Fernandez evokes in response to a musical tradition. It gives you a front row seat for an impressively, eclectically inventive piano recital.

Agusti impresses with poetic pianism and big musical ideas, intimately and thoughtfully realized. It's some rather engaging free improvisational music. It shows that Agusti Fernandez is a pianist of real stature. Do give it a hearing!
Posted by Grego Applegate Edwards at 4:57 AM