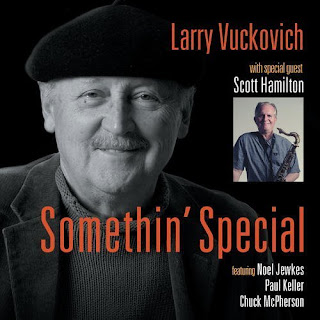 Here in the waning days of 2011 it strikes me that one of the hardest things to do right is what many jazz musicians are attempting today, to play in an older, more traditional style in a way that not only rings true, but also rings good, that's worth hearing.

Larry Vuckovich's Somethin' Special (Tetrachord Music 686) does that, all of that. He picked the right guys for this: tenor reconstructionist Scott Hamilton, a man who recrafts classic styles like no one else and so consistently so; Noel Jewkes on soprano and tenor, a player I'll admit I have not heard since Jerry Hahn's old Arhoolie album from the '60s, still sounding great; rhythm teammates Paul Keller on bass and Chuck McPherson, drums, with the right notes, the right sound, the right leverage. Then of course Larry himself, playing a fully ten-digit piano with the harmonic flourish and the soulful right hand. Mix nine jazz and songbook standards with a couple of Vuckovich originals and...presto, an album that sounds good coming out of the gate, at the finish line and on the hairpin turns in between.

Why is it so is hard to pinpoint exactly? Maybe it isn't in the end. Learning the right notes to play does not mean that you can do a credible job working in this style. The masters of hard and be did more than string notes together, of course. They cultivated a sound, something you cannot notate with any precision. And they played (swung) in a style that also involved infinitely gradatable points of attack, again which cannot be set down with any easily read accuracy onto music paper. It's something you feel, intuit, bring out in your playing. And they are doing it here.

Scott Hamilton makes a great example because he channels a tenor sound steeped in the nuances of past masters and has impeccable timing. By now it's hard to say, like a Romper Room session with the Magic Mirror, "I hear Hawk, and I hear Lester, oh, and there's Arnette Cobb and Lockjaw Davis, Ben Webster..." and so on. Because he's internalized it all and made it his own. Larry V. is his own man too, incorporating all the nuances and subtleties of the style without copping licks.

Hey, this is a good one. It is. Listen to it a couple times and you'll see!
Posted by Grego Applegate Edwards at 4:30 AM