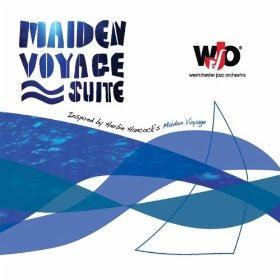 The WJO (Westchester Jazz Orchestra) is a Westchester County, NY, based 16-member big band under the direction of Mike Holober. He and three other arrangers (two also band members) have penned some nice big band re-arrangements of Herbie Hancock's Maiden Voyage, the famous Blue Note album of the mid-'60s. Their CD Maiden Voyage Suite (self-released) gives us the result, a well put together rethinking of the classic, with sophisticated, idiomatic, straight-ahead big band writing and some quite decent soloing. There are notable artists in the band, namely Ralph Lalama, Jason Rigby, Marvin Stamm, Jim Rotundi, Ted Rosenthal, and Harvie S, but everybody pulls together for some very tight, well-executed performances.

This is arranging that does justice to the striking melodic and harmonic style of Herbie's "mid"-period while never sounding the least like a mere transcription/blow-up of what the original smaller group was doing.

This is their second album and it is solid, very solid indeed. Certainly those who love the original Maiden Voyage album will have plenty to dig into here, as will those who like a modern Jones-Lewis style big band.
Posted by Grego Applegate Edwards at 4:44 AM