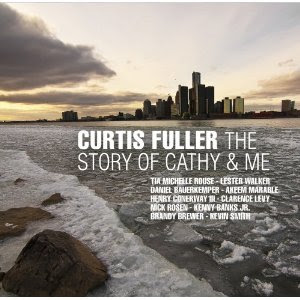 Mr. Curtis Fuller, a giant of the trombone, the hard-bopping master on countless sessions from the '50s on... He is still doing it, though not as energetically and not as consistently as in his prime. Hey, he is not a young man. And with age comes a kind of reflective wisdom that you can dig for yourself on his new disk, The Story of Cathy and Me (Challenge 73309).

It's a heart-felt tribute to his late wife and how much she meant/means to him, in music and brief snippets of dialog. He brings in a group of solid musicians and everybody does a good job. There are standards and originals, some boppin' and some balladin', a little bit of vocals and a lot of instrumentals.

Mostly it is Curtis expressing his love for his wife. Now that's touching and it sure touched me. It's good to hear Mr. Fuller hitting it and it's as much a tribute to HIM for that as it is to his wife. Yeah, Curtis.
Posted by Grego Applegate Edwards at 5:39 AM