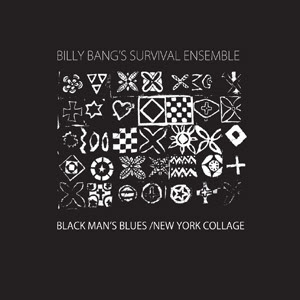 The late violinist/
bandleader/
new jazz luminary Billy Bang had a lengthy and fruitful career creatively, with a discography of seminal recordings that are ripe for re-evaluation. As if to extend that legacy, No Business Records recently issued a 2-CD set (NBCD 30-31) covering two very solid and moving sessions, one previously unavailable, the other out-of-print. It's Maestro Bang with his Survival Ensemble, 1977, and it's entitled Black Man's Blues/New York Collage. The first session is a live appearance in Harlem in support of Solidarity with Soweto, May 1977. There are effective head melodies, recitation of some free-thinking poetry, and heated collective and individual soloing from Billy on violin, Bilal Abdur Rahman on tenor, William Parker, bass, and Rashid Bakr, drums. The second disk gives us "New York Collage," an extended WKCR NYC studio session from a few weeks earlier, which adds Henry Warner on alto and Khuwana Fuller on congas.

This is a group with a recognizable sound, in part due to the distinctive styles of Bang, Rahman and Parker, in part because of the overall group dynamic and the thrust of the rhythm section as a whole. It captures the sound of a great band during a less self-conscious phase of the music. And it gives you some prime Bang violin and Parker bass.

It provides me with a much greater appreciation for what Billy was doing in this period and seems to me one of the missing pieces in the puzzle of his development. It is essential Billy Bang, I think.
Posted by Grego Applegate Edwards at 5:19 AM