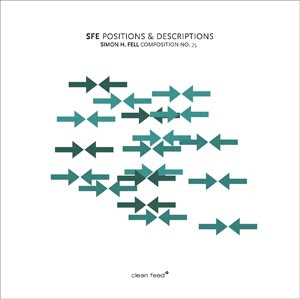 Fifteen musicians (many of them noted for their avant improvisa- tional talents) plus conductor tackle Simon H. Fell's full-length Composition No. 75 on SFE's Positions & Descriptions (Clean Feed 230). Not unlike Anthony Braxton, Fell seeks to create from the musical languages of modern classical and avant jazz a long-formed hybrid that melds some of the traits of each camp. Fell put together nine performance sections/movements in this composition that serve as vignettes and try (successfully, I believe) to hang together as a cohesive statement.

It was commissioned by the BBC and performed after only two-days rehearsal in 2007. Composition, conduction, improvisations and pre-recorded material come in and out of focus in interesting ways. It is a music to be heard with undivided attention to have an effect.

It is of necessity a first-stab at creating a more definitive version of the work. So there are times when one might hear that more could be done with what is being done. The logistical and economic difficulties of putting together a mid-sizable ensemble such as this and have them play through each section with systematic attention to detail is nigh close to impossible in today's climate, however, so in many ways we are lucky to have this version to appreciate.

Simon Fell is doing interesting work, this is an interesting ensemble and the piece moves the avant nexus forward several steps. It is worth your time to listen closely to this one.
Posted by Grego Applegate Edwards at 5:26 AM