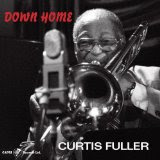 Curtis Fuller, legend, trombonist of great influence and flair, elder statesman of jazz...at an age where many might be inclined to take it easy, Curtis keeps on going. His new album Down Home (Capri 74116-2) puts him in the company of some very-much-better-than-average hard boppers for a program of down home Curtis originals, a couple more by band members and a standard for good measure.

This is rootsy music in the Fuller tradition, with a three-horn frontline of Curtis, Keith Oxman (tenor), and Al Hood (trumpet and fluegel), along with Chip Stephens, piano, Ken Walker on bass, and Todd Reid, drums.

There is some good soloing going on (Oxman impresses especially but Hood can turn your head too) and it's classic-style Fuller music. Curtis may not sound as vigorous as he did 20 years ago, but when he plays, it's pure Fuller, albeit boiled down to the crux, the essence of his style.

Down Home is in the pocket and hard hitting. Keep it going Curtis. We hear you!