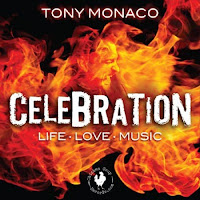 In the ongoing "Great Organ Trio Revival" we have been experiencing for more than a decade now, Tony Monaco may well be the one to take the "popularity crown". The innovation crown or the artistically most subtle crown are other considerations.

His special 2-CD set Celebrations (Chicken Coop 7016) gives you a vast assortment of the sorts of things he's been doing. Half of the compilation covers highlights from the seven albums he's put out previously. The other half has him settling in with some of his current playing partners.

Monaco went right to the source by studying with Jimmy Smith. His playing reflects that very much--he is a Jimmy Smith on steroids. A man of monster B-3 chops and an insatiable appetite to make that Hammond sound. What he isn't is especially subtle. You wont hear an awful lot of Larry Young or Charles Earland's post-Smith-iterations, though he can do funk right up there with the best of them. Like Jimmy Smith, his music bypasses mostly the Mingus-Trane-Miles phase of the music and locks in with blues licks up the ying-yang and lots of minor sevenths. You do know the drill I suspect.

But the fact is, he's a man of huge energy and drive. He does this sort of thing so well and in the process, takes the strictly Smithian ethos a few steps further.

There's so much music in this set, I can only point towards it. Yes, there are the bluesy things, the soul things, the Blue Note boogaloo things, the grits and gravy, then there are some cuts designed for radio friendliness--a number with a gospel group, a less than successful Monaco Sinatra-ish vocal on a ballad. . . . and others.

When he's got the soulful bluesy thing happening, he's very much in the groove and no doubt in the handful of Hammond exponents that can nail that like a manic carpenter. He's less successful with harmonic sophistications or with bopping hard.

You don't expect everybody to do everything, I suppose. And when you remove mentally the couple of excessively commercial cuts, this is an impressive testament to Monaco's Hammond mastery. He's a crowd pleaser but he sure can play!

Posted by Grego Applegate Edwards at 8:04 AM