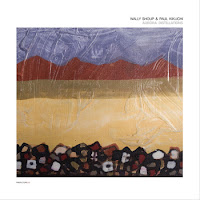 Drummer-percussionist-conceptualist-leader Paul Kikuchi has been devising some remarkable explorations of the free-ambient spectrum in years past. Many of the releases I have covered in the various blogs. There's a new one, for limited release on LP and as a download. It's saxman Wally Shoup and Paul in a series of duets, Aurora Distillations (Prefecture 005).

First thing to note: the entire session was recorded in a 2.6-mile-long cascade tunnel built in 1900 and abandoned in 1928. The environment provided the date with a natural ambiance that frames all the music in a most unusual way. There are long reverberences more than echoes, stimulated by where the musicians set up, and the drums and percussion benefit from it especially. Shoup's alto, too, gets much from the natural cavernousness. In fact Wally often seems to be playing the tunnel as much as the alto. Or rather, he plays to the tunnel, like how the JATP sax soloists would often project to the balconies with crowd arousing honks and squeals. The content of the playing-to and the results, understandably, are quite different here. But there is a kind of parallel.

There are four relatively short works, all filled with a free evocation, almost a ritual sense of sonic purpose. The third segment is by far my favorite, for Kikuchi's remarkable play of metallic bell-like percussion, but it's all worthwhile. This may not be Wally Shoup's greatest performance and this may not be Paul Kikuchi's most impressive ambient outing. But in both cases one must remember that it is spontaneous music to sound the old tunnel, and so it is not as much a performance as a paean to that space.

It's something to appreciate and zone into. It may not be absolutely essential but it is absolutely a world of its own. Explore.