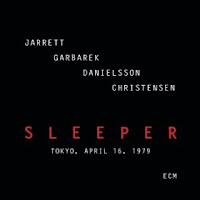 Sometimes you hear unreleased music from an important period in an artist's career and get a kind of epiphany. That's what happened to me listening to the newly released 2-CD Sleeper (ECM B0017162-02), a live recording from 1979 with the remarkable European Quartet of Jarrett, Jan Garbarek, Palle Danielsson and Jon Christensen. Though I loved the American Quartet of Jarrett, Redman, Haden and Motian for their very idiomatic, original way, the European outfit on the right night could blow away all comers.

Sleeper, recorded on just such an occasion in Tokyo, proceeds to do just that. The rhythm section is wound up like a top and spins, spins, spins with threads of fire. Jan Garbarek is in fully fleshed out form and lets loose with some of his finest recorded solos.

And Keith. . . you may as I sometimes do forget what a master of phrase he was then. He still is, of course, but then he had the kundalini energy wave going full tilt. He could play just about anything that came to his fertile imaginative musical mind, and did.

This long and intricate set of music reminds you and affirms to you that the Jarrett Quartet was not just one of the most popular groups in jazz at the time, they were also among the very best, the very innovative, the very original, the very satisfying. Time passed and each of them has gone on to other peaks but never was it quite like this. The times changed, the music changed with it. Nonetheless this is Jarrett at a high peak indeed.

This is music that deserves to be called great. Because it is. It's at least as good as the earlier Personal Mountains live disk. Maybe better. Indispensible, in other words.

Posted by Grego Applegate Edwards at 4:43 AM