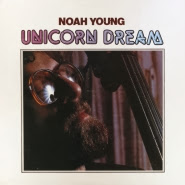 Noah Young, originally known as Richard Youngstein, is a fine contrabassist, jazz composer, perhaps lesser known out there yet a fundamentally important figure in avant-free jazz from its formative period in the '60s on. He came on the scene in Roswell Rudd and Robin Kenyatta's respective groups, played with Carla Bley on Escalator Over the Hill, with Jimmy Giuffre, all kinds of seminal folks. He married and raised a family, found that the gigs were not enough to sustain him, ended up training and practicing as a licensed psychotherapist. He lost his beloved wife to cancer years ago. Now he himself is quite ill, and can no longer play because of neurological complications. But he is a living force on social media, coming up with inspiring thoughts, culling from wisdom from the east, and struggling to stay here on this earth to help others. I count him as a friend, full disclosure here, so my words are not entirely impartial. But as we know there is no such thing as impartial. We are by nature partial beings. And I would not be writing this if I didn't feel strongly about the value of his music. So we press on.

He put out his own album on LP in 1980. Unicorn Dream (Laughing Angel 33). It is out of print at the moment but somebody should do something about that. If you look around on the net you may be able to find a copy nonetheless. It's become a part of yesterday. But it sounds like today.

The album presents various avant-free-contemporary jazz segments in ever shifting combinations. Most of the compositions are Noah's and they are excellent. There's one by Andy LaVerne and that one has a mid-period Corea feel to it. The rest are post-Ornettian and prime examples at that. Noah plays excellently on contrabass throughout, whether out-walking, soloing with a very inventive and hip outlook, or as a member of the ensemble, a horn-like presence. There's one, the title cut, which is Noah overdubbed to form an acoustic bass quartet and that's something to hear--it has teeth!! And then there are shifting group configurations from cut to cut. Cleve Pozar, a fabulous drummer that needs to be remembered and heard, is a near continual presence and he sounds terrific. But then so does Mark Whitecage (on alto and flute), Bobby Naughton (vibes), Perry Robinson (of course clarinet) and Peter Loeb on tenor, who I don't believe I've heard previously but turns in a fine performance.

This is one of those releases that may have slipped through the cracks back then for many listeners, but there was no justice in that. In fact it is essential, excellent listening whether you love a bass played with true artistry or you just want to hear some primo avant jazz from the era. It's as good as it sounds on paper if you know the names. Or even better. And if you don't, here is your chance.

Try and find a copy! It will gladden Noah's heart if you listen. Mine, too. This is the real deal!

Posted by Grego Applegate Edwards at 8:03 AM