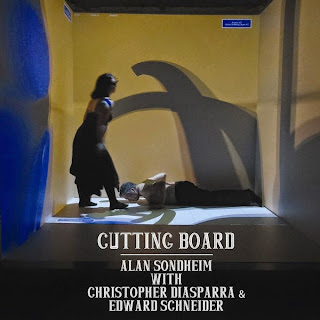 Alan Sondheim came to our ears years ago principally on the two albums he did for ESP, Ritual-All-7-70 and T'Other Little Tune, issued in 1967 and 1968, respectively. I came to him a little later through these albums, which impressed me as uncompromisingly home-made in their DIY experimental avant improvisatory thrust. On them Sondheim played guitar and a battery of other instruments, neither evoking jazz or new music syntax but rather forging his own vocabulary that reached out to world musics but only obliquely so.

Much time has passed and apparently also a number of releases came out that I have not heard as yet. He returns to the ESP fold with a new recording Cutting Board (ESP 5004). On it Sondheim matches sonic textures with Christopher Diasparra on tenor and baritone saxes, and Edward Schneider on the alto sax. Sondheim plays a wealth of instruments, from chromatic harmonica, sarangi, classical guitar and flute to electric saz and ukulele. As always Alan's playing is about sound and texture, not as much typical linear technique.

The totality of the album hangs together as experimental free improv more than free jazz per se, though Schneider and Diasparra give out phrasings more akin to post-new-thing sax expressions than not.

As is always the case with Sondheim, the music suits your ears best when you wipe your listening mind of expectations. This music has little in common with JATP, standards, or even ensemble avant jazz and new music as they come to us today. It is Sondheim music and for that it is very good. It is musical sound as art. So go ahead and listen.

Posted by Grego Applegate Edwards at 5:49 AM