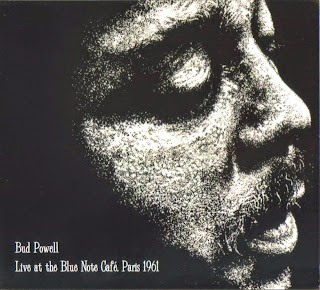 Bud Powell in the later phase of his career has some parallels with later Lester Young. Both suffered in their later years from external and internal difficulties that were made even more difficult by racism in its various guises. Both are considered to have done their best work in the earlier days of their career. And both could belie their general reputation of decline to make excellent recordings in the later phases of their musical lives.

A favorite Bud Powell recording for me, later or not, has been for many years his Live at the Blue Note Cafe, 1961 which came out on LP in the '70s and got my attention from the first as a beautiful representation of later Bud when he was totally on. I have not followed the ups and downs of its availability over the years because I already had the LP. But now, happily, it is available again on ESP (4036). The trio of Bud, Pierre Michelot (bass) and Kenny Clarke (drums) were in regular residence at the Blue Note in Paris when these sides were recorded. Earlier that year the trio rolled the tapes for three numbers of the trio with Zoot Sims. They are included here and I am happy they are. It is more fine music and Zoot sounds very much into it.

The rest is trio all the way, with all three in excellent form. Bud is fired up and sounds in total command. They run through standards and bop classics. Bud sounds a bit more Monkish perhaps than he did in the classic period, no more definitively so than on a moving version of "Round Midnight" but also on "Thelonious," and "Monk's Mood." They are worth the ticket for this CD alone. But then it all is excellent. Keep in mind, this is not Bud channeling Monk. It is Bud as himself, which was always Monk-influenced in the widest sense.

It is prime Powell, evidence that he could still very much come through in the later period.

It is essential. I don't need to say more.