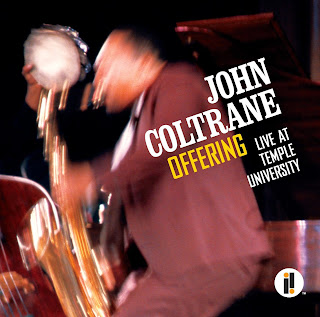 New unreleased John Coltrane surely is an event. Such is the case with the 1966 concert Offering, Live at Temple University (Resonance Impulse B0019632-01 2-CDs). And yet from what I gather, there are those who disapprove. (I try not to read anything on a recording before I review. In this case social media reacted to some of it and I was drawn in.)

By the time we now live, 2014 at the moment, it has become clear that the avant garde in music will not likely become a universally appreciated phenomenon. Late Coltrane is a part of that and as such has had detractors from the very beginning. The unfortunate militancy of Neo-Trad from the '80s on, against all free-avant and electric forms of the music, has only heightened that tendency by officially sanctioning it.

The fact is, though, Coltrane in 1966 was a part of something that included his music and quite a few others as well. Sure the times were turbulent and the music reflects that. But whether in response to that or not, there was a musical movement in full-flight that started with Ornette Coleman's breathtaking entrance into the public ear from 1959 on and grew as artists such as Albert Ayler took things a step further. "New Thing" is what it was called by some. The music gave primacy to expression, a more or less universal disregard for set chord changes, a loosening of the pulse in the direction of "free time", where there was periodicity but symmetrical patterns in 4/4 and the like were avoided for a more open rhythmic stance.

Trane of course was at the top of his game, in his first stylistic incarnation, when all of this started happening. His response was, after his various tenures with Miles and Monk, to open up to "modality", and via the classic quartet of Trane, McCoy, Garrison or Workman and Elvin to extend the polyrhythmic possibilities of swing and head for a more expressive open stance.

The formation of his last band was the next step in his gradual embrace of New Thing avant garde jazz. He dreamed one night that he was going to play sax like Albert Ayler, and the gradual movement toward more overt expression was a part of that. Rashied Ali replacing Elvin Jones gave him drumming that had a regular forward drive but no set patterns that would imply standard swing, though Rashied certainly swung in his own way. The open stance of Alice Coltrane's piano replaced the recurrent patterning brilliance of Tyner with something more open-ended, corresponding to what Rashied was doing. Adding Pharoah Sanders as a second, very caustic and turbulent sax exponent put the finishing touches on what Trane was after. It was all deliberate. It did what Trane wanted it to do--to allow him to embody directly the New Thing ethos.

The wash of rapid rhythmic pulsation from Rashied allowed Trane complete freedom to play with ferocious intensity or beautiful rubato rapture. Alice opened things up harmonically so that all notes were possible, though that doesn't mean the music was ever atonal. Trane got the harmolodic logic of Ornette, that you could modulate anywhere tonally in your playing and the band might follow or modulate elsewhere, so long as a pitch center remained whether stated overtly or not.

So that's where Trane was when he stepped on stage at the large auditorium at Temple University on November 11, 1966. His new band had been playing for a while and the roles of each musician pretty much had gelled. Regular bassist Jimmy Garrison was for whatever reason not on stage that night (actually he had quit the band for a time. Thanks to Sabir Mateen for the clarification.). Instead Sonny Johnson fills the bass chair. Alice, Pharoah, and Rashied were very much present. Then there were several hand percussionists added and a few guest spots for lesser known local saxophonists. Both groups add something to the ambience.

The concert, fortunately, was recorded for broadcast by the local college station. They seemed to rely on one microphone with a possible second as a spot mike but it was apparently mixed down to mono on the spot. The result, taken from the master tapes made at the time, is very clear audio, but not always entirely balanced. At times the rhythm section is less audible than they should have been. But the positive side is that Trane and the other saxophonists are put at times in stark relief. And that means you can really hear what Trane was playing that night, close up.

The repertoire consisted of expanded versions that stretch out very nicely. "Naima", "Crescent" and "My Favorite Things" from earlier times; "Leo" and "Offering" as new numbers.

Now those who find this album not to their liking either don't understand or don't appreciate late Trane. It is perhaps an acquired taste, and if you don't like "free jazz-new thing" you probably won't get with this last phase of Trane. What he might have evolved into had he lived is speculation. What he was doing then was entirely consistent with where Trane had been and the very personal way he transformed himself and his band into a "free" ensemble. This is late Trane fully flowered.

There are some really ravishing examples of Coltrane's tenor in full bloom here. He can be frenetic, yes, as can Pharoah, but he can be beautifully rubato, almost as an extension of what he worked at on the unaccompanied tenor cadenza on the Impulse version of "I Want to Talk About You" from years before. Untrammeled now by a more geometrically explicit rhythm section, he can and does play atop the free rhythm washes with very lyrical, very expressive brilliance. Listen especially to his work on "Naima" and "Crescent" and you will hear it. The band in Japan had moments where Trane unleashed a lyrical storm in similar ways, but this recording puts him right at your front door, so to speak.

If you are a confirmed hater of the later Coltrane I don't see how this will change your mind. Except maybe this heretofore unfamiliar recording (albeit available in lower quality bootlegs for a while but never with the completeness and pristine original master sound) will cause you to listen more closely.

This music is not a mistake. It is not a degeneration. It is not even a transition. True, there is Trane here doing something a little different than on his very last recordings, such as Interstellar Space, but these are concert length expositions of some prime works, and so there is a different pace, a stretching out. It is fully developed Coltrane at a peak. It is a revelation for the master himself and his playing. It is John Coltrane as he was on November 11, 1966. And that cannot be replaced.