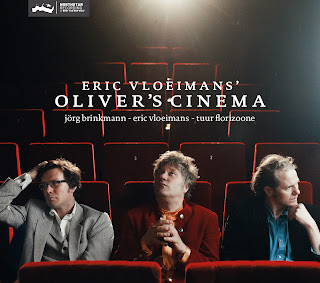 Chamber jazz has become a large part of the international scene. Not to rehearse history here but it it has been with us for some time. . . Beiderbecke's "In A Mist", the John Kirby bands, the MJQ and Jimmy Giuffre, the AACM from the '60s on, and so forth.

From the Netherlands we have a small group devoted to the chamber sound, headed by trumpeter Eric Vloeimans: his Oliver's Cinema (buzz zz76111). It's a trio of distinction with of course Vloeimans on trumpet, Tuur Florizoone on accordion, Jorg Brinkmann on cello.

It is music with a lyric, folkish bent. There is no bop, post-bop or new thing going on here. The closest thing to compare the structured melodic sounds with might be Carla Bley in an ultra-lyrical mood. There is that village transformed feeling that you can sometimes hear with Ms. Bley. People have compared Eric's trumpet sound to that of Miles Davis. That's seems true enough in terms of the softness of tone, but otherwise this is miles away, and not to say that is bad. He is supremely lyrical.

All three members are quite good. The cello work, mostly pizzicato, gives a lighter sound where a bass would thicken things. When Brinkmann switches to arco, he shows virtuoso mastery. Florizoone plays accordion with style, acumen and a lovely tone that meshes well with Vloeimans' trumpet, which shines forth with a tender glory.

The songs are originals by all three, plus some cinema-specific themes like "Rosemary's Baby" (Komeda), "Cinema Paradiso" (Morricone).

It's a beautiful album, redolent with atmosphere.

Posted by Grego Applegate Edwards at 6:40 AM