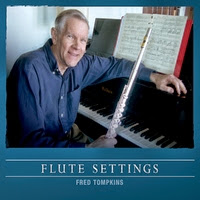 Last month we took a look at Fred Tompkins' classically tinged jazz composition as recorded in the late '60s-early '70s by a stellar lineup of jazz all-stars (Fanfare 8, see post for September 4th, 2014). Today we jump ahead to the present, 2012 to be exact, and a recording of Fred Tompkins' recent work, Flute Settings (self released).

To draw comparisons with Fanfare 8 would not be quite fair. That record involved carefully conceived compositions recorded over a period of years. This album has good compositional elements--four by Fred, one a free collaborative improv with pianist Jim Hegarty, one by Hegarty himself, one by Boyd F. Becker-Nunley who plays steel pan on the number, and Ornette's "Lonely Woman".

As one can understand from the title the album is a showcase for Fred Tompkin's flute playing which is warm, lyrical, nuanced and open. He is not quite an Eric Dolphy in terms of technique, nor does he try to be. But he is quite effective and compelling in the solo role. The music ranges from Fred's work with flute and samples ("Voices") that plus the addition of Charlie Dent on drums ("Con Moto 3"), duets with Hegarty on piano ("Lonely Woman", "Melody" and "Free Form"), solo flute ("Solo Extensions"), and two different quintets, one with Becker-Nunley and a second steel pan voice ("Tabanca Time") and the final number ("Islands") with reeds, piano, guitar, and drums joining Fred.

This is generally a looser, more openly jazz-oriented date, some of it free form, others more arranged.

The compositional side of Tompkins (and others) can be heard to good effect but in other ways it is a more improvisational approach that prevails.

Nonetheless there is much in the way of thoughtful music to be heard, good flute presence and an open attitude that for its sincere straightforwardness has much charm and listenability. And it's great to hear that Fred is still at it, making very good music.