Touch and Go Sextet, Live at the Novara Jazz Festival 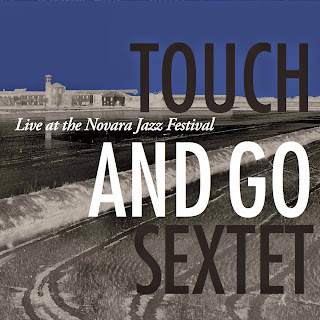 I've lived now for over 20 years in a Manhattan-adjacent NJ town that was where Ozzie Nelson grew up and attended high school. He went on to become a successful singer-bandleader and then was responsible for the quintessentially '50s Americana comedy TV show "Ozzie & Harriet." The show stood in its quirky way for the Middle America that Ozzie grew up in and espoused. Today there is not much evidence of that pancake-eating homespun suburbia. It is not to be found. Not in this town, anyway. Not around here. In its place is a new America, pluralist, culturally diverse and ever-evolving into something we sometimes are not so sure of. The music of today that captures that new world we live in is surely not Ozzie's big-band sides, nor Ricky's rock and roll, but more the modern fractalist new jazz, such as can be heard with the Touch and Go Sextet.

Their album featuring drummer Vijay Anderson's compositions is out. It is called matter-of-factly Live at the Novara Jazz Festival (Nine Winds 0314). As the liners tell us the band formed originally to showcase guest composer-artist-instrumentalists--Avram Fefer, Vinnie Golia and Marco Eneidi. In the meantime Vijay Anderson was studying with the great Roscoe Mitchell at Mills College. Roscoe instilled in Vijay a confidence in his composing which ultimately and fortunately led to this album project covering Vijay's music, recorded with the sextet live.

The band is a group of talented, mostly West Coast players and they shine forth on the album. Vijay of course is at the drums, Aaron Bennett is on tenor and baritone, Sheldon Brown on alto and bass clarinet, Ben Goldberg on clarinet, Darren Johnston on trumpet and Lisa Mezzacappa on acoustic bass.

The compositions are nicely turned with ensemble contrapuntal thrusts of a very modern sort and room for collective and individual solo expression.

The believing is in the hearing, however. It is not just that they do a free/composed set with maximum individual-collective expression, it is how well they express Vijay's formidable charts and how that launches the sextet into excellent avant modern jazz territory.

This is a capstone disk, a really fine assemblage doing music with a personal and collective stamp that flows with the best on the contemporary scene but does it in a unique way. I am stoked with this one. By all means, get it and listen!