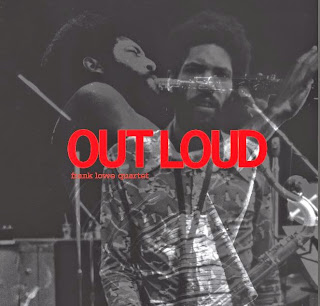 After his first album Black Beings came out (see February 2010 review at http://gapplegateguitar.blogspot.com/search?q=black+beings for my take on that), Frank Lowe went back into the studios, this time with Joseph Bowie on trombone, William Parker on bass, and Steve Reid at the drums. It was May 1, 1974 and "loft jazz" was at a peak in New York. The tracks recorded then were intended as Lowe's second but instead his label at the time had him return to the studios to record what became Fresh, a different sort of album altogether.

Happily for us the real second album, Outloud (Triple Point 209), is now available in a state-of-the-art 2-LP set that includes the welcome bonus of the group at Rivbea for the second LP.

After the two-tenor (Lowe and Joseph Jarman) onslaught of Black Beings this was a slightly less dense outing. Outloud gives us Lowe as the sole tenor. He is inspired to create a mix of testifying outbursts and some passages of more openly melodic improvisations that show a slight influence of Archie Shepp but as an inspiration, not as a copy. It is all Lowe. William Parker is truly on fire on bass. His playing is exemplary in every sense. Steve Reid stokes the fire with driving drums. Joseph Bowie is at his raucous and inventive best. The Frank Lowe compositions are excellent vehicles and set the table for a great improvisatory meal of sound, so to speak.

This is a heretofore unknown new thing loft era avant jazz classic. The Rivbea session, captured sometime soon after with Rashied Ali as engineer-recordist adds to our full appreciation of that band. The music is just slightly more dense. Trumpeter Ahmed Abdullah joins the group for the final side and gives us all that makes him the great improviser he is.

The accompanying booklet is excellent. This is what a (new) reissue should be: beautiful pressings, great graphics and superior music in all senses. Very much recommended.