The Vanguard Jazz Orchestra, Over Time, The Music of Bob Brookmeyer 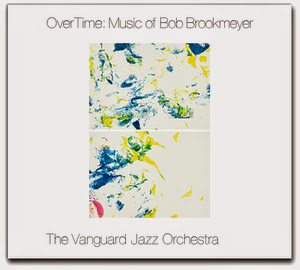 Bob Brookmeyer, simply put, has been underrated for too long. It's not just as a valve trombonist, either. He wrote music that sounds as fresh now as it did then. If I am not mistaken my first brush with Bob as composer came via the charts he did as member of Gerry Mulligen's Concert Jazz Band, which in many ways was the precursor to the Thad Jones-Mel Lewis big band that began holding forth at the Village Vanguard on Monday nights with Brookmeyer a charter member. He left the band to do studio work on the West Coast but returned to the band as its musical director after Thad Jones passed.

Some of his compositions-charts were an important part of that band's repertoire in the '80s. Time went on and I lost track of what he was doing. But a new albums puts it all together for us, past and present. I speak of a special Vanguard Jazz Orchestra album devoted to the music of Brookmeyer--Over Time (Planet Arts 101413).

First off the band sounds phenomenal. Oatts, Smulyan, LaLama and Jim McNeely are all there and a host of others whose names perhaps I should recognize but I don't. Nevertheless the band is in crack form. They take on eight of Brookmeyer's arrangements ("Skylark") and compositions (the rest), some from a while ago, others so advanced and modern they could have been written yesterday.

There are times when Bob combines new music techniques with his completely idiomatic feel for big band; other times they are boppish and post-boppish. Always they have a flare.

It's all so good that I am slightly stunned. The combination of the completely fresh musicality of these works and the Vanguard Jazz Orchestra's heated and superlative execution of same are such that I can only say, "listen to this one without fail!"

It's a corker and should remind us all of Maestro Brookmeyer's impeccable originality. I'll stop there.