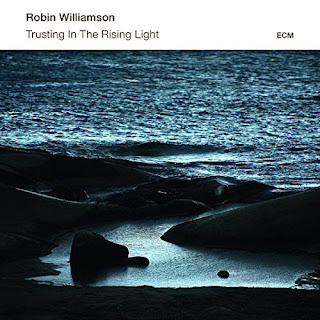 There is music that defies expectations. Music that presents itself beyond the categories one has internalized. Robin Williamson is like that. His is a kind of art song, at once folkishly Celtic (he is Scottish, actually), yet with sophisticated, very poetic lyrics and a singer-songwriter thrust. His fourth ECM album Trusting in the Rising Light (B0022100-02) brings all that home to me. I have missed the earlier ones. This one features Robin on Celtic harp, guitar, Hardanger fiddle and vocals. Mat Maneri adds his patented smarts on viola. Ches Smith appears on vibes, drums and percussion. So we have two avant prog jazz luminaries contributing their own ethos to the mix. The results are, after a period of acclimation, very rewarding.

Could I say that Robin Williamson is a folk-Scottish sort of Leonard Cohen? Not quite but in a way. A modern troubadour? That's a part of it. An avant folk bard? Yes. He was a founding member of the Incredible String Band. Perhaps that explains much once you recall. Yes, the quirky folkiness of psychedelic Zen madness is still there, much burnished over time, experimental yet elemental, rooted yet spiralling outwards into today and the future.

So that's it in a nutshell. This is an album to light your imagination. Song and poetics, earthy roots and avant reaching forward, all combine in ways that grow stronger the more you listen.

It is a happy program of song gems performed without pretense yet with great impact. A joy!