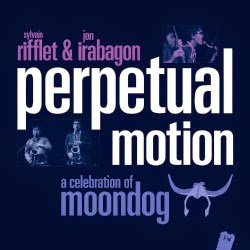 When an album wakes you up, and you play it maybe three times before you start getting the hang of where it is coming from, that certainly bodes well for the ahead qualities of the music. I experienced that with the album by Sylvain Rifflet and Jon Irabagon, namely Perpetual Motion (A Celebration of Moondog) (Jazz Village 570047D).

Moondog, as many will know, was a fixture of non-conformity, a hobo who crafted his own music well outside the mainstream of anything going on in the United States at the time, save perhaps Harry Partch, but even then more a parallel than a matching force. Moondog was a fixture of New York outsider art, performing on the street and creating a number of albums in his day that mostly puzzled the world but influenced those open to its iconoclasm. His was a folk avant music, if you will...more out of time than ahead of it.

So French reedist Sylvain Rifflet amassed his tenor, clarinet and electronics gear and melded with American new light Jon Irabagon (perhaps best known as a member of MOPDTK) on alto and tenor, adding to it all with an unusual group and recreating Moondog anew with some striking rearrangements of his music. Sylvain conceived carefully of a reworking of the music, utilizng a children's choir, Irabagon's glowing sax work, adding Bejamin Flament on percussion, Phil Gordiani on guitars, Joce Mienniel on flutes and MS 20, and Eve Risser on piano. It all was recorded and video'd live at the 30th Banlieues Bleues Festival.

The audio has a sort of assertive iconoclasm in keeping with Moondog's outsider stance. It goes in many different directions in a new jazz-meets-new-new diversity. Rifflet and Irabagon do some great improvising together and separately, and the rest comes together with a sort of anything goes and the devil take the hindmost boldness.

This is music better heard than minutely described. What's nice is it goes the distance in its own way so that even if you know Moondog inside-out this adds to his legacy and gives us contemporary jazz that fits no mold at the same time.

Get with this one. No, I am not going to mention Blue. This recording gives you reasons to move on, very good ones.