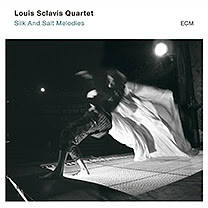 I have not been hipped to French clarinetist-composer Louis Sclavis all that much until now. I did like his work with the Eldorado Trio (see review from back on November 10, 2010). His new album Silk and Salt Melodies (ECM 2402) has been on my player and I appreciate what I hear.

The music has a general ECM vibe, meaning in part it is melodious and spacious. But there is also an active element, a noteful, partially folk-inspired aspect that sets his music in a larger context than just a lyric melodiousness would imply. (And of course ECM music is more than that anyway most of the time.)

As a player he is well worth hearing. How many clarinetists are active today? Not enough but he qualifies as one to hear. And the band on this date has a kind of singularity. The sound colors of the band make for something that stands out. Gilles Coronado on guitar is widely eclectic. Benjamin Moussay on piano and keyboard has prowess and a very pianistic modernity. Keyvan Chemirani brings out a key ensemble trait with his finely executed traditional Persian hand drumming on the zarb (tumbek).

Together they match up with some serious compositional contributions from Sclavis. The results stand out as chamber jazz of a very worthwhile sort. It's all different enough that having this to hear repeatedly is very recommended.