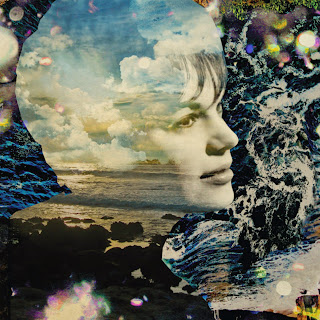 Rob Mazurek, cornetist, composer, bandleader, has increasingly introduced electronics into his music, to excellent effect (for those who dig that--and I am one). He lost his mother tragically in eleven days earlier this year, a victim of the cancer that takes a person unawares and devastates quickly. It was a profound shock to his sensibilities, as these things are. The music on his new album reflects the aftermath of loss in profound and overwhelmingly intense ways. This is Rob Mazurek and Black Cube SP, the Sao-Paulo based outfit with Rob on cornet and electronics, Mauricio Takara on drums and cavaquinho, Guilherme Granado on keys, synths and sampler, Thomas Rohrer on rabeca, electronics and soprano sax, Rogerio Martins on percussion, Rodrigo Brandao on voice and everyone else contributing their voices as well.

The album is Return the Tides (Cuneiform). It is a hugely despairing cry on one hand, an outburst of collaged grief, very thick and electronic, recorded very hot almost to the level of distortion. And yet as music and gesture it attempts a transcendance, a beyond state. Whether it quite gets there is no doubt a very personal matter with Rob and his loss. I cannot say.

It is very heavy, even for Rob, filled with an avant metal force that goes out to the universe. Rob is playing with searing heat and the band most definitely keeps up with him.

It is in a way a disturbing album. A cry. But an artwork that by transforming the intense feelings gets us to feel its representation in sound and understand. Perhaps it's Rob's most extreme statement to date. If I had engineered this date I am not sure that I would have mixed the outcome at these levels, but then that's part of the expression here. It's a distorted kind of anguish, and as expressive as anything I've heard recently. So for Rob it must be saying what he felt. Amen to that.

Posted by Grego Applegate Edwards at 6:52 AM