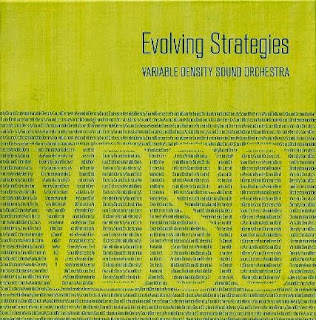 Guitarist-composer Garrison Fewell's Variable Density Sound Orchestra has made some excellent music in the past. The smaller ensemble heard in the album Evolving Strategies (Not Two MW911-2) has a particular resonance, in part because of the beauty of the compositions and their improvisational fulfillment, and in part because they are some of the last recordings made by the avant titans John Tchicai and Roy Campbell, Jr., both of whom were tragically taken from us not so very long after.

The band as a whole is every bit as good as the illustrious nature of the names. OK, perhaps bassist Dmitry Ishenku is not very well known, still he is very good. But then there is trombone master Steve Swell, who graces the session with his rangy expressions and a composition that stays long in the mind, "Mystical Realities," with a very groovy ostinato and a head melody that matches it. John Tchicai is on tenor and gives us two of his compositions and some beautiful improvisations. Roy Campbell reminds us why he is so missed on trumpet, flugel and flute. Reggie Nicholson turns in as always the right performance, with an impeccable feel and touch on drums. And then there is the leader, Garrison Fewell, with his very smart guitar freedom and exemplary compositions.

These are players at the peak of modern avant jazz and they perform accordingly. Whether collectively or singly they come through with sterling utterances that could serve as models for what the state-of-the-free-art is all about today. The compositional frameworks are both sophisticated and down-home at the same time, reminding at times of what was so exciting about the work of AACM artists in the first years of their blossoming (and after, surely).

It's an album you grow into each time you hear it, so that by now it is a recent favorite for me. It is that good and so much worth hearing and having. Get it!