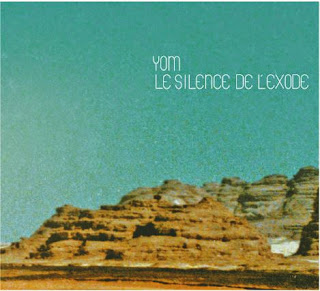 If this blog goes further afield than some to cover the world in its widest sense, it is in part because I believe firmly in the interconnectedness of "serious" music today. There is much in the way of cross-fertilization of styles to be heard on the contemporary music scene.

A very good example of this can be found with the clarinetist-composer Yom and his Klezmer-meets-the-world approach. Le Silence de l'Exode (Buda) is an integrated compositional suite that addresses the Jewish Exodus and the diaspora as a musical state of mind. Yom is joined by a contrabassist, a cellist, a Persian traditional percussionist and at times an oud player to create a hauntingly eclectic fusion of Jewish and mid-eastern elements.

The virtuoso clarinet of Yom takes center stage for the most part. He is a formidable player with a fabulous tone that is both Klezmer-like and also suggests the ornate, noteful cross-roots of the style through what sounds like Greek, Turkish, Baltic and mid-eastern ornate clarinet sub-styles. His very engaging, spectacular playing has a beautiful complement in the bass, cello and percussion with their composed-improvised parts. And the cellist especially, but the others too get the chance to show virtuosity as the suite unfolds.

Perhaps nowhere is it more clear how contemporary fusion jazz and mid-eastern music are natural allies in sound. I would not hesitate to call this one a kind of tour de force for the Klezmer clarinetist and his band. It journeys virtually to a time when the music of the Israelites may indeed have sounded something like this, but in any event Yom shows how his own Klezmer affiliations benefit from a widening of the perspective. It is a musical presentation that has great power by virtue of its strongly integrated inspiration and haunting melodic qualities.

Everyone fits together to fashion a music that convinces with its compositional-virtuoso way of looking at the musical roots of the region and the diaspora as a whole.